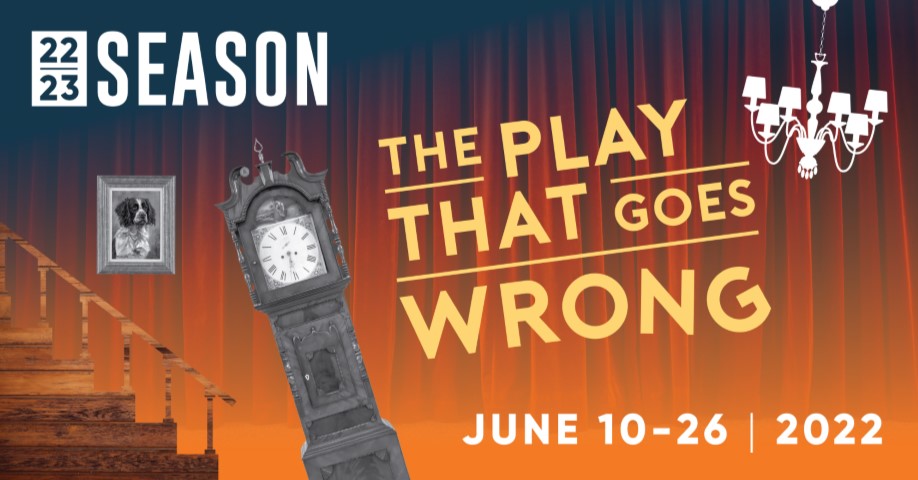 Keystone Theatrics at The Playhouse At Allenberry Announces Auditions for The Play That Goes Wrong!

Show Description
From Mischief, Broadway masters of comedy, comes the smash hit farce. Welcome to opening night of the Cornley University Drama Society’s newest production, The Murder at Haversham Manor, where things are quickly going from bad to utterly disastrous. This 1920s whodunit has everything you never wanted in a show—an unconscious leading lady, a corpse that can’t play dead, and actors who trip over everything (including their lines). Nevertheless, the accident-prone thespians battle against all odds to make it through to their final curtain call, with hilarious consequences! Part Monty Python, part Sherlock Holmes, this Olivier Award–winning comedy is a global phenomenon that’s guaranteed to leave you aching with laughter!

Please be prepared to:
– Perform a memorized 1-minute comedic monologue
– Read provided selections from the script
– Be prepared to fill out a conflict sheet at auditions (be as specific as possible about conflicts throughout the rehearsal period)

*Additional audition times MAY be able to be scheduled ONLY if you are unable to attend the posted audition dates or callback date. Please contact Keystone Theatrics Staff at casting@keystonetheatrics.com to schedule an audition at least two weeks in advance if this is the case.*

Rehearsals will begin shortly after auditions.  Tech week will be from Saturday, June 4 through Thursday, June 9. No absences will be accepted during tech week or performances.

Please make sure you can fully commit to the rehearsal period and performance schedule before auditioning.  You must be willing to make the show a priority.

Performers Needed
Performers ages 18 and up are welcome to audition. We are looking for truthful, funny, physically adept performers who can commit to the style of the play and fully inhabit the characters. It is vital to believe in the characters who are performing the play-within-the-play, as that is from where the heartbreaking comedy comes. With that in mind, we are looking for actors with a keen ability and understanding of comedy, but are able to play the truth of the scenes. This show entails a lot of very physical comedy. Actors should be prepared for physically active and demanding rehearsals and performances. Unless strictly and specifically mandated from the playwright, all roles are open and available to anyone regardless of race, ethnicity, or body type.

Annie is the company’s stage manager with a Lancashire accent. She has the biggest journey of any character. She’s initially terrified by acting, but is willing to kill for it by the end of the play. Her terror turns to joy, and then to fury. She starts small, but grows and grows. Cockney or Northern England accent

Chris/Inspector Carter is the director of the play-within-a-play Murder at Haversham Manor and plays the esteemed Inspector Carter. This is the biggest day of his life. He is rigid and uptight. The experience of performing the show is both nerve-wracking and exciting. His pain is evident and every time someone laughs, the pain deepens. RP accent.

Robert/Thomas Colleymore wants to be Richard Burton, as evidenced by his presentational style. But he’s not a parody of a bad actor, just unaware of others around him. He does not feel bad when things go wrong and never learns from his mistakes. There’s a power struggle between Robert and Chris to be president of the Cornley Poly Drama Society (a position that matters a great deal to Robert). Must have RP accent and real vocal power.

Dennis/Perkins has no real desire to be involved in the theatre; he just wants friends. He believes if he does well in the show, he’ll be more successful socially. Laughter from the audience is agony and a personal tragedy for him. He’s slightly oblivious, but understands when he gets things wrong. RP accent.

Trevor is the play’s curmudgeonly lighting and sound operator. He simply wants to get on with the show. He doesn’t like actors. He is easily distracted and does many things he shouldn’t, including talking to the audience. When things go really sideways, he is forced to act in the play. Cockney or Northern England accent.

Jonathan/Charles Haversham is a bit bland personality-wise but sees himself as a James Bond-type. Excited and having fun. He technically has to drive the show. He cares about the play, but it’s mostly just for fun for him. The role of Charles Haversham is a very physically demanding role. RP accent.

Max/Cecil Haversham/Arthur has never been onstage before. He learned his lines and does exactly what he’s told to do. He has zero connection with any of the actors, but when he gets a laugh he breaks the fourth wall and engages with the audience. Childlike and naïve. His mistakes are fundamental. He doesn’t think anything through. RP accent.

Sandra/Florence Colleymore is vain and has a huge ego. She wants to be loved. She has ambitions to go to Hollywood and will hurt anyone standing in the way of what she wants, but is smart enough to stay on the good side of someone who can help her (like the director). The stakes are high for her. Very physical role – RP accent.